A philosophy major at Stanford during World War II, Mae Brussell, of Carmel Valley, was the great-granddaughter of Isaac Magnin who founded I. Magnin's clothing stores. Her father, Edgar Magnin, was a respected and well known Rabbi in Los Angeles. Mae might well have been expected to enter the clothing or fashion industries, or perhaps join the religious community, or even become a well-to-do housewife. To have known Mae Brussell is to know that the expected or accepted would be entirely out of the question. 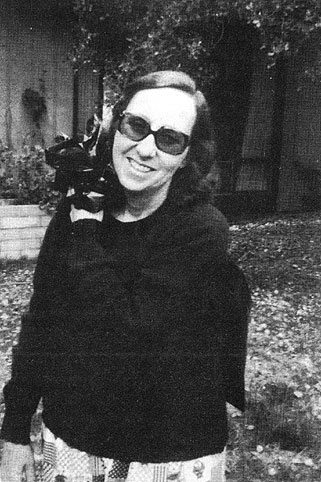 From the tragically historic day in November of 1963, when President John F. Kennedy was assassinated, until a few weeks before her death in October of 1988, Mae Brussell was a political researcher, writer, radio commentator ... a searcher, a seeker of the truth. She knew well the folly and the very real danger in taking the expected and the accepted at face value.

Considered by some to be 'far out' or a 'kook', Mae had the amazing courage and the incredible stamina necessary to champion an unpopular cause against powerful opposition. By subscribing to a large multitude of newspapers from all over the globe (which she read from cover to cover) and by reading thousands of books from many diverse viewpoints on subjects we would like to think are unrelated – political assassinations, mind control, fascism, the Mafia, and the Pentagon. She was able to correlate assorted and isolated facts and put them together to show that these things are very related! Mae looked at the Big Picture.

How she became interested in all of this is something most of us can relate to. Like many Americans she smelled something fishy in the way Kennedy's death was being explained by the authorities. When Oswald was killed she HAD to start looking into it for herself. As a mother of five children, she was concerned about what kind of America they were inheriting. Mae absolutely loved her country, yet she did not like some of the things some people were doing to it, especially "in the name of patriotism!" She said, "I have to care what America does to other people."

It struck Mae that it was extremely significant that such an intense DIS-information effort was being waged in the wake of Kennedy's death. She asked herself – What can I do about it? What can anybody do about it? She asked her fellow Americans – How can you sit back and swallow this? And she asked many of our leaders – Who do you think you're kidding? In the 26 years that followed, Mae Brussell's name rose into international prominence as a leading political theorist. She was careful to report only what she could prove, as outlandish as her statements might sound.

She began broadcasting a live weekly radio program "Dialogue Conspiracy" in 1971 on Carmel's KLRB FM which eventually went belly up while Mae Brussell was still going strong. Her show moved to public radio KAZU FM in Pacific Grove, under the new name "World Watcher". Every show was taped and catalogued. Other stations around the country began to pick up the program and broadcast from the tapes. She also wrote for various national magazines beginning with "Why Was Martha Mitchell Kidnapped?", in the Realist. She taught an accredited class in Conspiracy Theory and Analysis at Monterey Peninsula College in the '70's, and lectured across the country.

Mae was chronicling the exploits of Lt. Col. Oliver North years before the name and face of "Ollie" were forever printed in our minds, courtesy of the "handled" media coverage of the Iran-Contra hearings. Most of the other names are not anywhere nearly as well known.... most of the people didn't get caught – of those caught few were tried, and of those tried how many will be convicted? Basically, if it isn't front page stuff it isn't real news. Statistics show that not many people read very far beyond the first page of their newspaper, and of those that do, an alarming amount read only the first paragraph of any given article.

Mae is said to have read over 30 newspapers daily – thoroughly. She had her fingers on the pulse of the dragon. The dragon probably did not have a particularly fond feeling for that finger. In an interview Mae once said "If you study every (presidential) election since 1960 – it's sabotaging a hostage rescue plan, or stealing debate-briefing papers, or bullets or blackmail." Pesky finger that. This year we had armed, uniformed guards at some polls (LA), sudden death of John Mitchell, and CIA Director, William Casey.

Mae Brussell later remarked on how healthy Mr. Casey looked on T.V. and in the courtroom just days before he suddenly was stricken. "This does not look like a man who is going to die of a brain tumor." Yet he did die in less than a week, reportedly from brain cancer. In regard to Casey's death Mae also said, "The CIA brags about the hundreds of ways they have to kill people. Frank Terpil said he could go down an airplane aisle and brush something on someone's coat and within 3 days it seeps through ... and there's no trace of anything. Why have an old man bring down the institution – shold he possibly break under final cross-examination. If you saw Casey walking down the hall and grinning, and talking, and giving interviews – and the next day he was going to testify. And he's in his own building when he had those seizures – then he's put into an ambulance and never seen again! The fact that he was never seen again, and the circumstances of his robustness of the day before his testimony ... The man was not thinking or walking like a person with a brain tumor."

As a quick introduction to some major members of the "Secret Team" that Mae began to not only adroitly identify, but also, pin down their team position ... do the names Richard Secord, John Singlaub, Thomas Clines, Theodore Shackley or Fritz Kraemer mean anything to you? Have you noticed any peculiar connections? Richard Secord is a senior Air Force General, John Singlaub – a highly placed Army General, and both are identified with official Joint Chiefs of Staff decisions. Thomas Clines and Theodore Shackley both are former CIA operatives specifically involved with clandestine operations (most of which are so covert that the Congress was never informed.)

Fritz Kraemer for many years was Plans Officer at the Pentagon. Mae identified him as "Number One" most powerful person in the United States. She suspected that he was the very same Fritz Kraemer who was very high up in Hitler's regime and personally responsible for extremely strategic fascist atrocities in WWII. Mae believed they were the same man, but she never had any solid evidence and she always made the distinction between supposition and proven fact. All of these men are identified as being major players in what Mae, and increasingly more, political analysts have called "The Secret Team". Mae believed and was prominent in the movement to prove the existence of a covert power group comprised of military, and more significantly, major corporate business concerns. They (the Secret Team) are a chain of wide-ranging, long standing, government over-riding (sometimes usurping) corporations and governmental structures throughout the Western "Free World" sphere of influence. Generally they operated within, and/or in the crevices of, the U.S. government heirarchy.

If this is new to you it must sound fairly, if not very, far-fetched. That's today perhaps. Mae had found that among those who might stop to listen – the more one hears about these hidden movements, the more one wants to know. Truth is usually self-perpetuating, and it takes major efforts to side-track it. She had uncovered and proven the involvement of the Secret Team in the killing of Chilean leader Allende, among other covert activities including the bombing of Libya last year and the Australian Nugan Bank scandal.

Because of her outspoken views, and the fact that she made them so publicly available, she had received a number of death threats over the last two decades. Subsequent to a telephone threat in 1970, a very mysterious automobile accident claimed the life of her much loved daughter Bonnie, and the Carmel High School dance teacher. Another daughter, Barbara, was seriously injured. The accident took place outside of Ford Ord (U.S. Army training facility) on Highway One. The station wagon that rammed their vehicle was identified but never apprehended.

A life that included much personal tragedy also contained many important triumphs as well. As one of a handful of researchers working through the maze of dis-information, distortions, and cover-ups, she looked into stories that no one dared touch. She was a champion of truth and justice – The American way. If justice and truth still mean anything, history will remember Mae Brussell as an important woman, real patriot and heroine. She was these things and she was loved for it. Thank you Mae.